Prime Minister Mia Amor Mottley is urging Barbadians who have not yet come forward to be vaccinated against COVID-19, to do so.

She made the remark as Barbados received its first batch of Sinopharm vaccines, a gift from the People’s Republic of China, on Tuesday.

It was at exactly 1:00 p.m. that a Virgin Atlantic flight touched down at the Grantley Adams International Airport.

In addition to dozens of passengers, the commercial flight, which originated at London’s Heathrow Airport, brought with it enough of the two-shot vaccine to inoculate 15,000 more Barbadians.

The arrival of the 30,000 Sinopharm vaccines expands the vaccine offerings on island, as the country has previously received the AstraZeneca vaccine from India and through the COVAX Facility.

Health Minister Lieutenant Colonel Jeffrey Bostic, who was on hand to sign a handover certificate officially accepting the vaccines as well as 32,000 syringes, says the donation marks the continuation of China’s support throughout the pandemic. 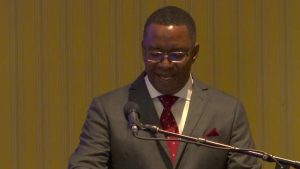